June 30, 1885 – The Chicago Streetcar Strike began on this day and continued through July 7.

June 30, 1912 – A Modern School, modeled after the ones started by Francisco Ferer in Spain, was created by the Grupo Luz in Mexico City.

June 30 1918 – Eugene Debs was arrested in Cleveland for interfering with army and navy recruiting.

June 30, 1922 – One million railway shop men struck.
(All from the Daily Bleed)
Posted by Anonimo 0 comments

June 29, 1898 – Michael Schwab, who was convicted for the Haymarket bombing, died from tuberculosis, having been pardoned and released from prison just a few months prior.

June 29, 1919 – Striking meat-workers in Townsville, Queensland, Australia clashed with police. Nine people were wounded in an exchange of gunshots.

June 29, 1936 – Jesus Pallares, founder of the 8,000-member coal miners union, Liga Obrera de Habla Esanola, was deported from the U.S. as an "undesirable alien." One hundred miners were arrested during the 1934 La Liga strike against the Gallup American Company in New Mexico.

June 29, 1983 – President Reagan said that one cause of the decline in public education was the effort to comply with court-ordered desegregation.
(All from the Daily Bleed)
Posted by Anonimo 0 comments

June 28, 1816 –Luddites attacked the Heathcoat and Boden's Mill at Loughborough, smashing 53 frames worth £6,000. Troops were sent in. Six Luddites were executed. The attack was part of a general revival of violence and sabotage of machinery following a bad harvest. At this same time, 'Swing' riots erupted in the countryside as a protest against low wages, unemployment & the Game Laws.

June 28, 1905 -- The mutinous crew of the battleship "Potemkin" entered the port of Odessa, which had been taken by revolutionaries. Workers' Councils formed.

June 28, 1914 – Austria's Archduke Ferdinand was assassinated by the Serbian anarchist Gavrilo Princip, whose attentat was said to have set off World War I, which killed between 5 and 10 million soldiers.

June 28, 1956 – 100,000 workers struck in Poznañ, Poland, shouting "Bread & Freedom. The protests were violently suppressed, with at least 67 workers killed. The government sends 10,000 soldiers to the city. The next day, another 70 would be killed, 700 would be arrested, and hundreds more would be wounded.

June 28, 1969 – Gay activists demonstrated in Sheridan Square and in front of the Stonewall Inn, where a riot occurred at 3 am earlier this morning when police raided the bar. Demonstrators were confronted by NYC Tactical Police.
(All from the Daily Bleed)
Posted by Anonimo 0 comments

June 27, 1869 - Anarchist, feminist and labor activist Emma Goldman was born in Lithuania. (From Workday Minnesota and the Daily Bleed)
June 27, 1880 – Helen Keller, the deaf, mute and blind author and socialist, was born (1880-1968), Tuscumbia, Alabama. (From the Daily Bleed) 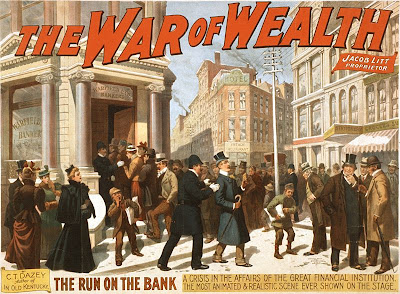 June 27, 1893 – The U.S. Stock Market crashed, initiating a four-year depression. During this depression, labor and strike activity escalated, as demonstrated in the great Pullman Strike of 1894. (From the Daily Bleed)

June 27, 1905 - The Industrial Workers of the World, also known as the “Wobblies,” the radical syndicalist union, was founded at Brand's Hall, in Chicago, Illinois. The Wobblies, advocate industrial unionism, with all workers in a particular industry organized in the same union, as opposed by the trade unions typical today. (From Workday Minnesota and the Daily Bleed)

June 27, 1905 –The mutiny on the Russian battleship Potemkin officially began, with the crew killing the worst of the officers. They sailed on to Odessa (June 30) where the workers were on strike, then escaped to Rumania where they obtained political asylum. (From the Daily Bleed)
June 27, 1935 - Congress passed the Wagner Act, authored by Senator Robert Wagner of New York. Also known as the National Labor Relations Act (NLRA), the legislation created the structure for collective bargaining in the United States. (From Workday Minnesota)
Posted by Anonimo 0 comments 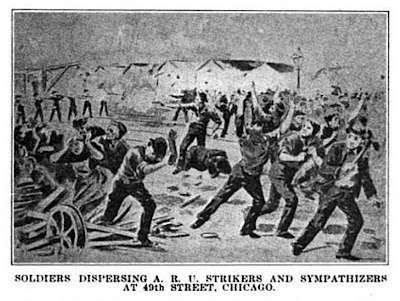 June 26, 1894 - The American Railway Union launched a boycott of all trains carrying Pullman cars, turning the Pullman strike into a national strike which was eventually crushed by federal troops and by lack of support from the more conservative American Federation of Labor. Strike leader Eugene V. Debs was imprisoned and many workers were blacklisted for their involvement. (From Workday Minnesota)
June 26, 1917 – The Bisbee, Arizona IWW (Industrial Workers of the World) miner strike. On July 12, 1,300 strikers, their supporters, and innocent bystanders were illegally deported from Bisbee by 2,000 vigilantes—over 200 miles in cattle cars, without food or water for 16 hours. (From the Daily Bleed and Wikipedia)

June 26, 1919 – The Winnipeg General Strike, which began on May 15, came to an end as the Winnipeg Labor Council "officially" declared the strike over at 11 o'clock. (From the Daily Bleed) 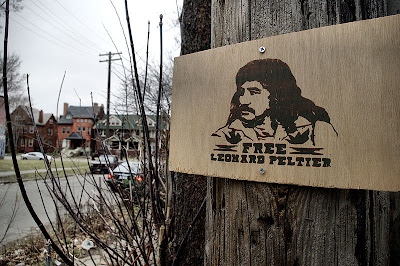 June 26, 1975 – The FBI provoked a shootout with members of the American Indian Movement (AIM) at Oglala, South Dakota. The deadly firefight left two FBI agents and Lakota activist Joe Stuntz dead. Two AIM leaders were prosecuted for the FBI deaths and found innocent. A third AIM activist, Leonard Peltier, who remains in prison to this day, was later framed when much of the same evidence is disallowed in his trial.
June 26, 1977 – Gay Pride marches occurred throughout the country, with 100,000 marching in San Francisco and tens of thousands in NYC.
June 26, 1994 – In commemoration of the 25th anniversary of the Stonewall Rebellion, over one million people marched in New York City in support of LGBT rights. 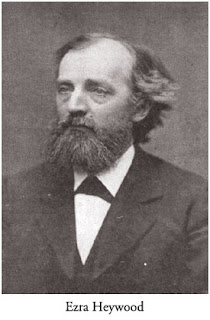 June 25, 1878 – Despite mass protests, Ezra Heywood was sentenced to two years hard labor for advocating free love and sexual emancipation as part of women's rights. Heywood was an anarchist, feminist and abolitionist who was hounded and harassed by the moralist vigilante Anthony Comstock. His wife, Angela Tilton, was considered by many to be even more radical than he was. (From the Daily Bleed)
June 25, 1893 - The Haymarket Martyrs Monument was dedicated at Forest Home Cemetery, Chicago, to honor the 8 anarchists who were framed and executed for the bombing at Haymarket Square on May 4, 1886. More than 8,000 people attended. At the base of the monument are Haymarket martyr August Spies’ last words: “The day will come when our silence will be more powerful than the voices you are throttling today.” (From Workday Minnesota and the Daily Bleed)
June 25, 1894 – Eugene Debs and his American Railway Union called for a boycott of all Pullman railway cars during the now-famous Pullman Strike. Within days, 50,000 rail workers were participating, halting all railroad traffic out of Chicago. (From the Daily Bleed)
June 25, 1921 -- Czech author Karel Capek's introduces the term robot in his play R.U.R. (Rossum's Universal Robots) in which robots, fed up with lousy work and pay, organize and rebel. The term comes from the Czech word “robota,” which referred to days in which peasants were forced to leave their own fields to work for free on the lands of the nobility. Even after feudalism had ended, the term was used to describe labor that was coerced, boring or uninteresting. (From the Daily Bleed)

June 25, 1941 - A. Philip Randolph (president Brotherhood of Sleeping Car Porters) called off the Negro march on Washington that had been planned for July 1 when President Roosevelt agreed to issue Executive Order 8802 banning racial discrimination in defense industries and government employment (creating the Fair Employment Practices Committee). (From Workday Minnesota and the Daily Bleed)


June 24, 1904 –Troops arrested 22 workers in Telluride, Colorado, accused them of being strike leaders and deported them out of the Telluride district. This was a repeat of events in March, in which 60 union miners were deported. (From the Daily Bleed)

June 24, 1917 – The IWW Domestic Workers Union supplied sandwiches to dozens of draft resistors in the Duluth, Minnesota jail. (From the Daily Bleed)

June 24, 1917 – The Russian Black Sea fleet mutinied at Sevastopol. (From the Daily Bleed)

June 24, 1919 – After the house of Attorney General Palmer was attacked on June 2, 1919, the Italian anarchist Luigi Galleani and his colleagues on the newspaper "Cronaca Sovversiva" were expelled from the country. Palmer oversaw the mass deportation of dozens of labor leaders, anarchists and communists, in addition to mass arrests.

June 24, 1971 – Seventeen workers were killed in a water tunnel in Sylmar, California, as the second explosion in two days rocked the worksite. (From the Daily Bleed)
Posted by Anonimo 0 comments

June 23, 1947 - The anti-worker Taft-Hartley Act was passed, overriding President Harry Truman’s veto. The act rolled back many of the labor protections created by the 1935 Wagner Act. Taft-Hartley weakened unions in numerous ways, including the banning of the general striking. It also allowed states to exempt themselves from union requirements. Twenty states immediately enacted anti-union open shop laws. (From Workday Minnesota and Shmoop Labor History)


June 23, 1966 – Race riots began in Cleveland, Ohio and continued for a month. (From the Daily Bleed)
Posted by Anonimo 0 comments

June 22, 1914 – After calls for revenge against Standard Oil for the Ludlow Massacre, an anarchist bomb intended for the Rockefeller Mansion unintentionally detonated in the Ferrer Center on this date, killing three anarchists and putting a temporary end to the Modern School, which was housed there. (From the Daily Bleed)

June 22, 1920 – Following an immense open air meeting in Milan supporting the local striking rail workers, people returning home were fired upon and assaulted by gendarmes, aided by nationalists. Five young workers were shot dead and many wounded. (From the Daily Bleed)

June 22, 1922 - A several hundred striking miners seized a group of strikebreakers scabbing for the Southern Illinois Coal Company, killing 19, in what would become known as the “Herrin Massacre.” Several strikers were held in the Williamson County jail, which is now a historical museum focusing on the conflict. Those who were tried for the murders were all acquitted. (From Workday Minnesota)
Posted by Anonimo 0 comments

June 21, 1852—Friedrich Froebel died. Froebel was a German pedagogue who coined the term “kindergarten” and produced the first educational toys, known as Froebel Gifts. Froebel was one of the first to recognize of the importance of activity and play in early childhood (Freiarbeit, or free work), as well as the notion that one learns by doing. Thus, kindergarten was not simply a poetic “garden” of children, but a literal garden for them to observe and interact with the natural world. Froebel’s kindergartens were suppressed by the Prussian government for its supposed denigration of religion and politics. He rejected the notion of original sin and promoted and practiced the coeducation of boys and girls. He also felt children should be able to grow and develop without the influence of arbitrary political and social priorities—ideas that would endear him to anarchists like Francisco Ferrer and others in the Modern School movement.

June 21, 1877 - Ten miners, allegedly members of the Molly Maguires, were hanged in Pennsylvania. Many historians argue that the Molly Maguires, a secret miners’ organization allegedly responsible for violence and social conflict in the coal regions, never really existed. The investigation into the miners’ involvement with the Molly Maguires was conducted by private detective agency. A private police force arrested them and coal company attornies prosecuted them. (From Workday Minnesota and the Daily Bleed)

June 21, 1964 - Civil rights workers Andrew Goodman, James Chaney and Michael Schwerner were disappeared near Philadelphia, Mississippi by the Ku Klux Klan, who beat them to death with clubs and chaings. Their mangled bodies were later found by federal agents. (From Workday Minnesota)
June 21, 1994 – The UAW began a strike at Caterpillar plants in Peoria, Decatur, & Pontiac.
(From the Daily Bleed)

June 21, 1997 – 100,000 marched in solidarity with striking newspaper labor workers in Detroit. (From the Daily Bleed)
Posted by Anonimo 0 comments