“There was a time in the history of France when the poor found themselves oppressed to such an extent that forbearance ceased to be a virtue, and hundreds of heads tumbled into the basket. That time may have arrived with us.” (From David Burbank, Reign of Rabble, The St. Louis General Strike of 1877, NY Augustus M. Kelley, 1966—Quoted in Strike!, Jeremy Brecher, South End Press, Boston, 1972).
These words were spoken by a cooper to a crowd of 10,000 workers in St. Louis, armed with lathes and clubs, participating in the national wave of strikes known as the Great Upheaval of 1877. He was, of course, referring to the Paris Commune, which had occurred just six years prior, in which the working class rebelled and took over control of Paris. 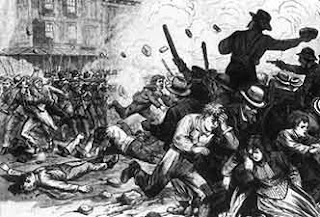