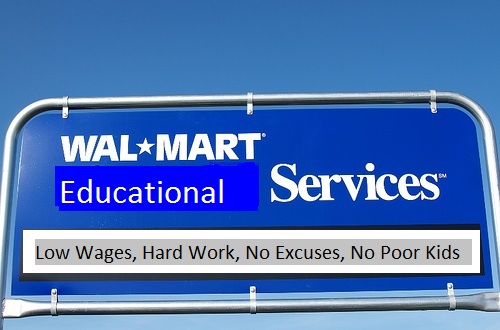 The Walton Family Foundation is giving a $25 million grant to the KIPP Foundation, according to the Denver Post. The grant is expected to allow the company to double the number of charter schools it operates. There are currently 32,000 students in 109 KIPP schools in 20 states plus the District of Columbia. KIPP is poised to replicate the Walmart model, by opening schools in towns and cities throughout the country, paying low wages, overworking their staffs, and squeezing out traditional mom and pop public schools by skimming off the best students and district revenues.
The grant will most likely be used to recruit and train young, starry-eyed and bushy-tailed teachers who are willing to work extraordinarily long hours without overtime pay and often no union protections.  The KIPP school day runs from 7:30 to 5:00 on week days and 8:30 to 1:30 on Saturdays twice monthly. Teachers are expected to be on call during evenings to assist students with homework and they are required to work on Saturdays and summers. In Baltimore, KIPP teachers were averaging 18% more than regular district teachers in terms of monthly paychecks. However, if they were paid for all the extra hours they were required to work, they would have been making 33% more than their peers, according to a piece in Education Week.
While the schools are free and supposedly open to everyone, they are notorious for their high attrition rates, especially for students who enter with the lowest test scores. A study by SRI International found that 60% of entering fifth graders at four Bay Area KIPP schools left before completing the 8th grade. Furthermore, their admission process screens out students who are not already self-motivated and compliant and parents must commit to much more involvement than required in traditional public schools, thus further weeding out many of the most challenging students.
Like other charter school, they get district funding, but are free from the rules governing traditional district schools. Additionally, they get millions of dollars in grants and donations from the likes of the Waltons, Fishers and other billionaires, which other district schools are denied.
With all these factors going for them, you would think that KIPP would be thriving, with long lines of families lining up to get in. Of course there are many who desire their low prices and brand name products. Many of their customers are just regular people trying to get by on a modest income, fed up with the high educational costs of traditional public schools.  Many others see them for what they are: a big box education management organization that exploits its workers and cheats its customers.
Posted by Anonimo