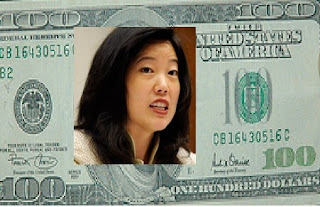 According to the Ed Deform movement, teachers unions are the main impediment to student success. All they care about is protecting incompetent or perverted teachers, keeping working hours short and salaries high and blocking real and meaningful reforms like private charter schools, abolition of due process rights, increased high stakes tests, and dumbed down Common Core Standards.

Rhee hopes the new Superpac, called “Parents and Teachers for Putting Students First,” will ultimately raise over $1 billion in its fight against the California Teachers Association and the California Federation of Teachers. One of their first campaigns has been to back Democrat Brian Johnson, a charter school executive running for the 46th assembly district in Southern California, pumping over $400,000 into his campaign.

Just Another Superpac to Benefit Corporate Interests
Unions, especially teachers unions, have been increasingly relying on political campaign funding as their primary tool for promoting the interests of their members. From the standpoint of workers this has been disastrous as it has taken resources, time and energy away from organizing and the promotion of direct actions like strikes and working to rule and focused them on the very indirect and fickle beneficence of political leaders whose interests lie primarily with business, not workers. The consequence has been a continuing downward spiral in workers’ wages, working conditions and living standards, with legislation increasingly favoring the interests of bosses over those of workers.

The most explicit recent example of the bankruptcy of this strategy is the teachers’ unions’ continued support for President Obama despite the fact that Obama has promoted numerous programs that are terrible for students and teachers (e.g., private charter schools, Race to the Top, Common Core Standards, evaluation reform, etc.). It is irrelevant that Romney might be even worse for teachers. A union is supposed to promote the interests of its workers and therefore should never endorse a political leader with a demonstrated track record of attacking those interests. They should especially not waste their members’ dues on that campaign, when those resources would be much more effectively spent resisting the candidate’s anti-worker policies.

From the perspective of the ruling elite, however, this strategy by unions has been much more of a frustration than a disaster. It has not stopped them from consolidating political power and increasing their wealth to levels unseen in nearly a century. Yet unions are one of the few remaining entities with bankrolls large enough to mount even a modicum of resistance and contest the wealthy in the political arena. Hence, destroying unions outright, or at least their ability to make campaign donations, has become one of the main priorities of the ruling elite. (An example is the Payroll Deception initiative being proposed in California).

MAD Madness
Amassing a stockpile of nuclear weapons large enough to annihilate the world several times over was a cold war strategy that proponents argued would make us safer by deterring the Russians or Chinese from using their huge stockpiles against us. If you nuke me, I’ll nuke you and the planet will be destroyed—Mutually Assured Destruction (MAD).

This arms race contributed to the demise of the Soviet Union by redirecting limited resources away from human needs and increasing their public’s disgust with their regime. However, according to many historians, it was the drawn out proxy war in Afghanistan between the U.S.-supported Mujahedeen and the Soviet-backed communist government that really blew their wad and brought down the U.S.S.R.

There has been an ongoing political arms race between wealthy individuals and the corporations versus unions and liberal nonprofits. It has always been an unequal race with the wealthy almost always outspending their opposition, often by a ratio of ten to one (or more). With the Citizens United ruling and the super spending by the Superpacs, this has only become more extreme and it threatens to do the same thing to the unions that military spending did to the Soviet Union.

It may not happen immediately. Unions will continue their copious spending in a desperate attempt to elect the lesser evils and block the most onerous legislation, all the while resisting strikes and other direct actions, discouraging their members from fighting back and continuing to give away more and more concessions to the bosses.

In the end, how different is this from withdrawing completely from political campaigns? In either case, the workers lose out. However, by withdrawing from the political game, unions at least retain their war chests, which can be used to organize and mobilize their members to directly pressure the politicians and the bosses, make their lives uncomfortable, cut into their profits, and make some real gains instead of always fighting just to make the losses less bad.
Posted by Anonimo