If it sounds too good to be true, it probably is not true. 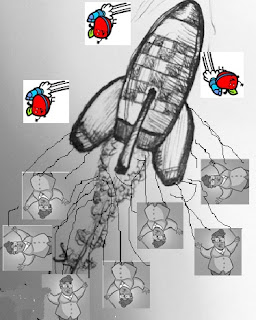 This common sense adage ought to prevent intelligent people from falling for costly scams. Yet otherwise smart people continue to get suckered at an alarming rate. This is particularly true in politics and education “reform,” where people seem to prefer the fantasy of a quick, magic bullet “fix” to social problems, than having to do a little research or critical analysis to determine if the proposal has any merit.

Consider John Danner, former school teacher and Silicon Valley entrepreneur, who claims to have found the solution to the academic achievement gap with his Rocketship charter schools. Rocketship’s students, who are predominately poor and Latino, have recently outscored the county and state averages on standardized exams, making Danner and Rocketship extremely popular within the Ed Deform movement as it has seemingly overcome the intractable negative effects of poverty on educational outcomes.

Danner now wants to take his Silicon Valley model on the road and expand it to 50 cities by 2020. Cities across the U.S. on jumping on the bandwagon, begging Rocketship to set up shop in their districts, while the Obama administration has put up $2 million to facilitate its spread. Milwaukee has approved the opening of Rocketship schools, as have New Orleans, Nashville and Indianapolis. It also has approval to open another 20 schools in the San Francisco Bay Area.

For the Kids or the Bosses?
What really makes the Rocketship model popular among the Ed Deformers is not its seeming success at educating lower income students. This is certainly a great selling point and way to increase public support and startup donations. However, what the Ed Deform movement is really after is the billions of taxpayer dollars that are still nominally under public control. Charter schools are, of course, one of their favorite tools to accomplish this. And a charter school that can quickly wean itself from philanthropic donations and become self-sufficient or start turning a profit is like gold to these vultures.

Here is where Rocketship has done some magic. Like other charter schools, Rocketship receives public funds, but is liberated from many of the limitations of traditional public schools, like having to hire unionized teachers and paying union wages. However, Rocketship doesn’t just slash wages—it slashes jobs, replacing teachers with computers and low-paid clerks and volunteers. Superintendent Maria De La Vega, of East Palo Alto's Ravenswood City School District, who opposed Rocketship moving into her district, was quoted in Palo Alto Online calling the Rocketship model ". . . a business design, not an educational program design that is constructed to promote literacy and academics. . ."

According to the Washington Post, students spend 2 hours per day in front of computers, cutting labor costs by 25%, allowing the schools to “extend the school day to eight hours [and] pay higher salaries to its nonunion teachers.” The computer labs are monitored by volunteers who have “experience with children,” according to Education Next, but no teaching credential (nor even bachelor’s degree) is required.

It should be emphasized that the “higher salary” does not translate into a higher hourly rate. Rather, teachers work longer hours (about 25% more to accommodate the longer school day) at a slightly higher yearly salary (10% more, according to the Post) that does not fully compensate them for the longer work day.

Additionally, 75% of its teachers come from Teach for America (TFA), which places teachers in the classroom after only 5 weeks of training. TFA teachers have a higher attrition rate than certificated teachers (69% quit within their first two years, while 88% leave within three years). Theoretically, this should result in a higher turnover rate, though the Post says that Rockeship’s rate of 25% is in line with the national average for low income schools (though not necessarily for low income schools in Silicon Valley). Even if their turnover rate is typical, their tendency to hire predominantly inexperienced TFA teachers still allows them to trim labor costs, since the pay scale is based on years of experience and they keep replacing low wage TFA teachers with other inexperienced teachers.

Even though Rocketship is considered a “nonprofit” charter school, it still helps facilitate the transfer of wealth from the taxpayer to private businesses. The emphasis on computer technology, for example, is a cash cow for tech giants that not only get to sell more hardware to the schools, but also software and service contracts, which can lock the schools into long term financial commitments. The replacement of unionized, credentialed teachers with poorly trained, nonunionized TFA novices and volunteer monitors contributes to the deskilling of the teaching profession, which undermines union strength and drives down wages (see here and here), not only for teachers, but others in the region. Danner, who is not a teacher or a principal at any of his schools, still skims off $150,000 per year in salary, according to the Post.

Higher Test Scores—The Jury is Still Out.
Rocketship currently has only 5 schools up and running, two of which recently completed their first years and lack test score data. Thus, all the excitement over their ability to close the achievement gap is based on very limited data, with only nominal reproducibility. And even one of their “successful” schools had a recent decline in test scores.

It is also questionable whether Rocketship’s study body accurately represents the full range of lower income students. Unlike traditional public schools, which are required to accept all students and cannot kick them out unless they have committed serious infractions, charter schools can exclude students for things like insufficient parental involvement. Indeed, Rocketship requires parents to attend monthly meetings and volunteer 30 hours each year. Even if these requirements were not strictly enforced after the fact, they would still likely cause some lower income families to avoid enrolling in the first place, thus skewing the demographics and test data.

High Tech Vs. Health, Thinking and Independence
Considering that Rocketship is currently only in the K-5 business, its heavy reliance on computers should give pause. The American Academy of Pediatrics has recommended that young children spend no more than 2 hours in front any type of screen or monitor, including television, videos and computers, as it promotes obesity, sleep and behavior problems, and can even impair academic performance. More screen time also means less active, creative play and learning, and less time to develop healthy social relationships with other children and adults.

Even if Rocketship did limit screen time to 2 hours per day, its students are still returning home after school and most likely spending more time in front of the television and computer. However, Danner has predicted that his students could spend up to 50% of their school days in front of computers as he develops better software.

On a final note, it is important to consider how a school is being judged as successful. Rocketship, like all schools nowadays, is being deemed a success by its test scores. In order to boost its state test scores, it compels its students to take numerous internal exams throughout the year to prepare them for the official exams and to provide the staff with data. Thus, Rocketeers (as Danner likes to call his students) are losing meaningful instructional time with well-trained teachers to test prep and practice tests, in addition to the time lost in front of computer screens.
Posted by Anonimo