The Coming CTA Sell-Out: State of Emergency in Review.

As the State of Emergency week of actions comes to a close in California, one might be inclined to speculate on the effectiveness of the multi-million dollar campaign by the California Teachers Association (CTA).  Being the optimist that I am, I thing the chances are pretty good that K-12 education will be spared another major cut (at least for the next year). That being said, the cost of this “victory” could end up being astronomical. The CTA has already spent millions in members’ dues on the week of action. However, the preservation of K-12 funding could cost teachers and other public sector workers dearly in concessions, while the sell-out deal could drive a permanent wedge between teachers and other public sector workers.
Be Careful What You Wish For—You Might Just Get It.
I see two possible scenarios unfolding in the coming weeks. In the first and more likely scenario, Republicans will convince Gov. Brown and Democrats to accept other cuts, without any new taxes or tax extensions, but will leave K-12 education alone.  Indeed, the Republican leaders put forth their own budget proposal yesterday calling for deep cuts for state workers, the mentally ill and the disabled. State workers would face a 10% pay cut, plus an additional 10% loss to their departments’ operating budgets, according to the LA Times. They also want to privatize prisoner health care, as well as many other jobs performed by state employees, which could lead to layoffs, furloughs and increased workloads for state workers.
The second scenario involves Republicans accepting the governor’s tax extensions in exchange for union concessions on pensions, seniority rights and/or merit pay. Considering that the NEA and AFT have both made statements (and in some cases actions) indicating a willingness to accept such concessions elsewhere, this scenario could also pan out in California.
Either scenario would allow the CTA to claim victory, pat itself on the back, and send teachers home for the summer with the confidence that they will have jobs next year, no increases in class sizes, and the delusion that they exercised collective power and won. This is possibly more important to the CTA bosses than the actual preservation of K-12 funding for a year, as it would justify the millions of bucks they spent on the State of Emergency campaign, while strengthening their reputations as educational freedom fighters.
A Poison Pill
The Republicans have everything to gain and virtually nothing to lose from either compromise, although they would clearly prefer the tax-free option. Public opinion polls show an overwhelming disapproval of any further cuts to K-12 education, though there is still plenty of disregard for the plight of the mentally ill, disabled and public sector workers. Therefore, the Republicans would win points with voters for appearing pro-education, without burning their constituents. Either taxes will stay low or teachers will pay for the tax extensions with pension cuts and other attacks on their working conditions and benefits—A sweet deal for the Republicans.
Either deal will be acceptable to the CTA as they would temporarily (sort of) protect their constituents by preventing further cuts, layoffs, furloughs, class size increases and shortened school years. Never mind that the tax extensions will do nothing to recover the $20 billion slashed from education over the past three years or prevent a similar budget battle in coming years. The status quo still means that class sizes will be among the highest in the nation and per pupil spending among the lowest, but at least things won’t get much worse, (or at least they won’t for another year).
The problem is that both plans come at the cost of jettisoning their class allies to the hawks. Up until now, public sector workers have been rallying to support each other against the national wave of anti-public sector hysteria. Acceptance of the Republicans no-tax plan could result in a permanent wedge between teachers and their allies in other public sector fields whose jobs and wages will shrink as a result. The temporary tax extension option, in contrast, will sell out all public employees, including teachers, by being tied to attacks on pensions and possibly union rights and working conditions, too. Therefore, accepting either compromise could permanently destroy any hope of solidarity from other public sector workers, reducing even further the chances of a successful general strike, or even a small victory in the likely budget battles in coming years. 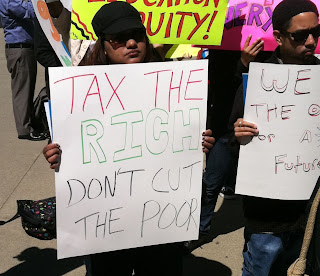 Demand What You Want—Not The Lesser Evil
The CTA leadership had originally planned a bunch of tepid phone calls and local rallies until Bay Area progressives within the state council demanded something more radical, like a state capital occupation and permanent tax increases on the rich in order to provide a stable funding stream. The energy of the progressive caucus and the reasonableness of their demands succeeded in garnering 100% support for the action by the state council. However, the CTA leadership immediately went into overdrive figuring out how to co-opt and weaken the plan. They assumed that demanding the rich bail out the state was too radical and hadn’t a chance, so they stuck with their original sell-out demand for regressive tax extensions that let the rich off the hook and made the poor and working class bail out the state. Instead of an occupation, they bought hotel rooms so members could leave the capital at closing time. They discouraged people from getting arrested. They did little to build solidarity from obvious allies like nurses and college students, effectively eliminating any chance that sufficient numbers of militant activists would attempt to do anything that might inconvenience lawmakers or disrupt business as usual.
One CTA regional rep angrily told me, “You don’t go in and sock them in the face on day one. Where are you going to go from there?” However, the CTA did just the opposite. Rather than going in with their most aggressive demands and militant direct action to back up those demands, they went in with weak demands and no militant actions to back them up. They had already given up before they started. Where are you going to go from there? What if the enemy agrees to talk? With such weak actions, a compromise is the best you can hope for, yet by starting from such a weak position, you have nothing left to give up (except your class allies, pensions, seniority, and other inconsequential items). The lesser evil generally results in something even less than the lesser evil.
What About the Arrests? What About CTA President David Sanchez?
Of course it is true that many teachers did get arrested. Even the CTA president, David Sanchez got arrested last night. But this was pure theater. After 67 Bay Area teachers and UC students got arrested on Monday night, Sanchez would have looked like a chicken shit little weasel to not get his hands a little dirty, too.
Almost everyone who was arrested was nabbed by the cops within minutes. There was no real attempt at a sit-in or an occupation. They waited until closing time. The cops told them in advance that they would be arrested and they were. No one was inconvenienced except those who spent the night in jail. No legislators were prevented from doing their jobs. No businesses were shut down. The jails did not overflow with teachers, forcing the city of Sacramento to stop arresting people and listen to their demands. The media said little or nothing about the demands that the rich bail out the state, that corporate taxes be raised, or that an oil severance tax be levied on oil producers in the state.
It seems rather crazy to spend the night in jail in order to convince wealthy lawmakers to increase taxes on the poor. It probably seems just as crazy to the poor as it does to the rich. Of course I don’t want to see any more cut from education, but not at the expense of low income families or even middle class families, and certainly not on the backs of my fellow workers in other fields. If the CTA president is willing to spend the night in jail, why not do it for a better cause, like tax increases on the rich and their corporations, or increased education funding? If the CTA is willing to support civil disobedience, why limit it to a purely symbolic gesture, rather than something with the potential to force policy changes?
Posted by Anonimo