Unions and union busting are big news lately. Thus, it should be no surprise that much of the media jumped upon a recent report by the U.S. Bureau of Labor Statistics on the state of union membership in America. The only thing surprising about the report was how differently it was parsed by various news sources.

The Los Angeles Times excitedly proclaimed that “Union membership grew nationally in 2011,” with unions picking up 49,000 new members. However, before you crack the champagne, the New York Times gloomily declared that “Union Membership Rates Fell Again in 2011.” The NY Times went on to say that the decades-long drop in union membership continued in 2011, falling to just 11.8% of the American workforce, a 0.1% decline from 2010. Life, however, saw this 0.1% as a sign that things were becoming less bad, posting the following headline: “Union Membership Rates Are No Longer Falling.”
Of course all three conclusions can be true. A drop of 0.1% may indeed be a leveling off after years of sharper declines (after all, 1.4 million union jobs were lost between 2008 and 2010). And if the number of total number of workers increased by more than the number of new union members, then the 49,000 increase reported by the LA Times could still result in a net 0.1% decrease overall, which was in fact what happened.
So is there any real news here at all?
Not really.
Union membership is still the lowest it’s been in decades and the reasons for the decline have not substantively changed. The biggest recent drops in union membership resulted from the massive layoffs and cuts that accompanied the recession, while the longer term trend has been driven largely by downsizing and outsourcing, combined with union busting, none of which shows much sign of abating. Furthermore, even if the decline has leveled off for the moment, continuing state and local budget crises will likely result in more waves of public sector layoffs and consequently more declines in union membership.
It is not just the vagaries of capitalism that have caused the decline in unionism. Unions themselves must take much of the blame for clinging to antiquated, nationalistic and selfish tactics and perspectives that alienate younger workers and divide the working class. The AFL-CIO, for example, has consistently jumped on the nationalistic and racist bandwagon accusing China and other countries of stealing our jobs, rather than working in solidarity with international unions to improve wages and working conditions worldwide.
Or consider the Keystone XL Pipeline that has pitted environmentalists against unions. Why should anyone support a pipeline that will carry crude oil from Canada to the Gulf of Mexico? It is dangerous, dirty and will actually increase oil prices because the oil is so expensive to extract from the Canadian tax sands. It will run through one of the richest agricultural tracts in the world, placing the water and food for millions of Americans at risk. Meanwhile, it will worsen climate change by increasing the amount of petroleum being extracted and consumed.
Of course the economy sucks and people want jobs and this project could provide some. But this is like saying that gangs provide jobs and should be encouraged or that child pornography creates jobs and should be promoted.
This brings up another backwards union perspective: Jobs trump all else.

Jobs are a means to an end: getting food into one’s mouth. “Good” jobs are good only in so much as they provide material security at minimal costs to one’s health and wellbeing and even this is an expedient. Many jobs are simply not worth preserving at all. Banking, insurance and real estate speculation serve no common good, while the automotive, petroleum, coal, tobacco and nuclear industries actually cause millions of deaths each year. To demand more jobs in these fields is to demand the proliferation of homelessness, pollution, warfare and preventable deaths, not a very compelling platform for attracting new members.
It is understandable that people are demanding jobs and that the unions want to preserve them. There is no hope in the foreseeable future that the state or society will adequately provide for the unemployed, or pay to retrain them, while the Protestant Work Ethic and American Dream mythology are so deeply embedded in our culture that many people feel degraded, useless or bored when they don’t have a job. 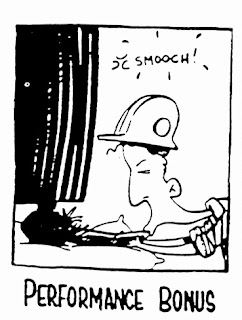 But there is another reason for unions’ obsession with jobs: it is a cheap and easy way for union leaders to win points with their members. Union bosses are constantly making compromises and deals with corporate bosses, like the UAW recently did in Detroit, to save a few jobs in exchange for pay and benefits cuts. The corporate bosses get increased profits by spending less on their employees, while the union bosses get to hold onto their cushy six-figure salaries and suit-and-tie lifestyles, free from the dirt and grime of the shop floor or classroom. By keeping their members on the job, unions can continue to collect dues that go to the salaries of their officers, and to lobbying and litigation. By ending conflicts quickly and cheaply through compromises and sellouts, unions reduce their bureaucratic and legal costs, leaving more money for their officers’ salaries.
This also helps to explain why unions have engaged in fewer strikes and labor struggles in the past three years than at almost any other time in the past 80 years. On the one hand, strikes are risky and can be expensive if members are jailed or the union is fined, as the ILWU in Longview, WA can attest. Lobbying, politics and litigation are also expensive, but they are easily outsourced to professional hacks, helping to keep the rank and file under control with promises that “our guy” will change things once elected. It is certainly much easier than organizing, which requires large numbers of well-trained organizers to go out into the “field” and actually listen to workers, something that bosses of all varieties, including union bosses, are loathe to do. Who knows, they might hear something they don’t like.

Lastly, mainstream trade unions benefit from the capitalist system and have no interest in challenging it. Indeed, they are dependent upon it. While they may challenge the bosses now and then, they will always send their members back to work under the belief that ruining the boss means their own ruination. Thus, it becomes imperative to union leaders that “peace” is maintained between workers and employers and that bosses continue to be permitted to earn huge profits on their backs, because this is seen as the source of jobs and potential raises. This perspective makes the boss out as the workers’ friend, which any worker can see is patently false.
Oh I love my boss
He’s a good friend of mine
That’s why I’m starving out on the bread line
Hallelujah I’m a bum,
Hallelujah, bum again,
Won’t you give us a handout to revive us again
First printed by the IWW, 1908, becoming the anthem of the Spokane free speech fight
Posted by Anonimo