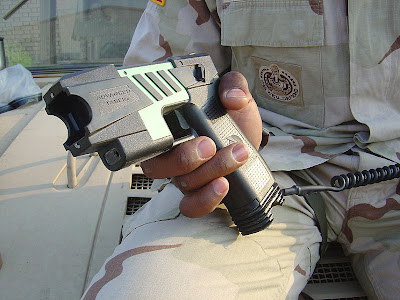 A 14-year-old student at Correia Middle School, in the affluent San Diego neighborhood of Point Loma, was tasered twice by police officers as he was arrested on suspicion of possessing of a stolen iPod. According to police, they had been alerted to a theft of $5000 worth of iPods and were questioning several students when one of them began to resist. The teen is being charged with theft and assaulting a police officer.
The 5-foot-10-inch, 150-pound teen produced two of the stolen iPods during the questioning, according to the OB Rag. When an officer told him he was under arrest, he refused to cooperate, telling the officers, “No, you’re not putting handcuffs on me.” Police say he thrashed and kicked so much that one of them was hospitalized with a knee injury.
School administrators were present during the questioning and the incident is being investigated to determine if the police used excessive force.
It reminds me of the time when I was a teenager and a cop accused me of resisting arrest, hit me in the head, and then sued me because his finger broke.
These were supposedly professional cops and a scrawny 150 pound teen. They couldn’t get cuffs on him without resorting to weapons?
Posted by Anonimo