The Bowl Curve Syndrome
I once observed that the test scores and class averages in many of my low income classes produced graphs with a shape very different than the stereotypical bell curve, with a majority of students earning C’s (the top of the bell) and fewer students earning A’s, B’s, D’s and F’s (the sides of the bell). In my classes, the curves were shaped like inverted bells, or bowls, with very few C’s, slight higher numbers of A’s and B’s, and much higher numbers of D’s and F’s. 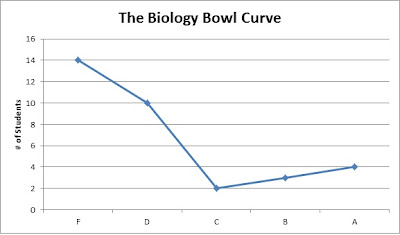 My interpretation of these results was that I had very few students who were academically and socially ready for college-preparatory level biology (the A’s, B’s and C’s) and a majority of students who were not ready (the D’s and F’s). Indeed, this hypothesis was supported by other data (e.g., high percentages of my students were reading far below grade level, failing other courses, and/or deficient in graduation credits). Furthermore, the students with D’s and F’s had significantly higher rates of absenteeism and were less likely to complete their assignments.

While my hypothesis made a lot of sense, it did not explain why there were fewer C’s than A’s or B’s. However, I did observe that many of these C students ebbed and flowed depending on who they were teamed up with in the class. When grouped with higher performing students, they tended to rise to the occasion and do better in the class, while the opposite occurred when they were grouped with lower performing students.

This was not just a case of riding on their peers’ coat tails or putting their names on a “group” activity that was completed mostly by the higher performing students. Rather, their tests scores, lab reports and other individual assignments began to improve. It was if their peers’ self-efficacy and optimism inspired and motivated them (e.g., “if they can do, maybe I can, too, with a little more effort”). In contrast, when surrounded by students who were struggling and failing, it appeared to them as if no one was succeeding and the system must therefore be rigged and impossible, so why bother?

Academic Success is Infectious
My hypothesis was recently confirmed by research led by Hiroki Sayama, director of the Collective Dynamics of Complex Systems research group at Binghamton University in Binghamton, N.Y. and published in the Public Library of Science (PLoS).

Sayama’s research team asked students at Maine-Endwell High School in Endwell, N.Y. to rank their classmates as either a “best friend,” a “friend,” an “acquaintance” or someone they didn’t know. They then examined their grade point averages and how these changed between January 2011 and January 2012, finding a linear relationship between students’ grades and those of their peer group. For example, if a student’s grade were initially higher than their peers’ grades, the student’s grade tended to decline over the course of the year until it was more in line with the peers. Likewise, if the student’s initial grades were lower than their peers’, their grades tended to rise over the year. They also found a correlation in happiness, obesity and other traits between students and their peer groups. The correlations were strongest at the “friend” level, and much less significant at the “best friend” and “acquaintance” levels.

There were a number of variables and biases in the experiment that are worth noting. The sample size was relatively small (only 158 students and only one school were examined). Consequently, the results may have been skewed due to the small sample size or the possible concentration of students of similar socioeconomic background (e.g., they were predominantly white and suburban). Also, the social networks were constructed based on self-reporting by students. This could also skew the data, as people do not always respond truthfully or accurately on self-reporting surveys. Furthermore, the categories to which students assigned their peers (e.g., best friend, friend, acquaintance, etc.) are subjective and difficult to quantify. One other significant bias inherent in this research is that students may be choosing their “friends” based on preexisting similarities in behavior, academic readiness, motivation and attitudes about school. Thus, a correlation in academic achievement could be explained by behaviors that were coincidental rather than influential.

Take Home Message: Desegregate Schools and Classrooms
While the research indicates that “friends” had a greater influence on students than did acquaintances, my own experience has been that even acquaintances can have a measurable influence. The problem is that grouping students with “friends” or “acquaintances” will have a negative effect if the “friends” and “acquaintances” are performing more poorly. Thus, the solution should be to surround each low performing student with more successful peers. However, in low income schools, which have higher percentages of low performing students, this would be impossible.

One way around this dilemma is to desegregate schools based on socioeconomic background and academic performance (i.e., reassigning students across a school district such that all schools have similar numbers of low performing and high performing students). Of course, this would have little effect in a district that is composed entirely of lower income students. However, in cities like San Francisco, where there are wide socioeconomic, ethnic and achievement gaps between schools within the same school district, such a reassigning of students could go a long way toward increasing the ratio of successful students per classroom and thus the chances that a lower performing student is grouped with or makes friends with a higher achieving student.

Of course this is much easier said than done, as San Francisco has discovered each time it has attempted to (and failed) desegregate its schools.
Posted by Anonimo