February 12, 1853 – Illinois passed a law requiring any blacks entering the state & staying more than 10 days to pay a $50 fine. If unable to pay, they would be sold into slavery for a period commensurate with the fine. (From the Daily Bleed)
February 12, 1880 - John L. Lewis, president of the United Mine Workers and founder of the Congress of Industrial Organizations (CIO), was born was born on this date. In 1935, he pulled the UAW from the American Federation of Labor (and punched out Carpenters Union President William Hutcheson in the process) when the AFL refused to endorse industrial unionism. Lewis then formed the CIO, which organized millions of unskilled, mass production workers into unions in the 1930s and 1940s. (From Workday Minnesota)
February 12, 1909 – The National Association for the Advancement of Colored People (NAACP) was founded on this date by W.E.B. DuBois & others, New York City. (From the Daily Bleed) 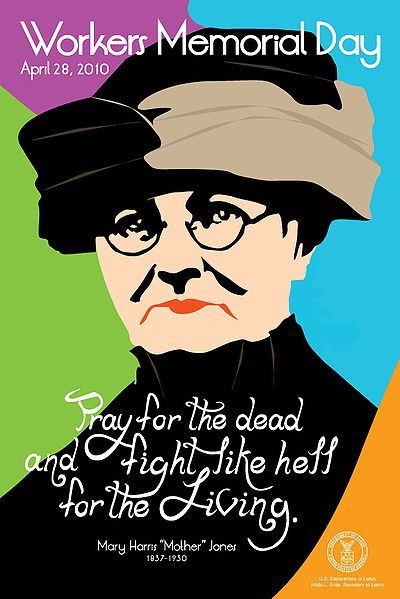 February 12, 1913 – Mary Harris "Mother" Jones led a protest against conditions in the West Virginia mines was arrested. (On May 8, newly-elected Governor Hatfield releases her from jail.)
A government official once called Mary Jones "The most dangerous woman in America." She was still out there at age 83. No rockin' chair for her... (From the Daily Bleed)


February 12, 1947 – 60 anti-draft demonstrators burned their draft cards in New York City during an antiwar demonstration. Between 400 and 500 veterans and conscientious objectors from World Wars I and II burned their draft cards in two demonstrations, in front of the White House in Washington and at the Labor Temple in New York City, in protest of a proposed universal conscription law. (From the Daily Bleed)
Posted by Anonimo