Last month, Cuomo punished New York school children by withholding $250 million from their city’s school budget because the mayor and the UFT failed to come to an agreement by his arbitrary deadline. When this failed to achieve his desired goal, Cuomo said that he would write into this year’s state budget the authority for the state to take over the evaluation system, according to the New York Times. If Bloomberg and the UFT fail to come to an agreement by May 31, the state’s education commissioner, John B. King Jr. will impose a plan by June 1 and the city would have to implement it by September 1, 2013. The sticking point between UFT and Mayor Bloomberg was the mayor’s refusal to let the deal expire at the end of 2015, even though most other state school districts had only 1-year deals (see Labor Notes).

The UFT leadership has already accepted many of the most onerous conditions of the “reform,” including the use of student test data to evaluate teachers, despite the fact that this data is an unreliable and inconsistent way to assess teacher quality (see here and here). However, this irresponsible and stupid concession was made during negotiations between the union and the teachers’ employer during collective bargaining. By imposing changes to the evaluation system, the state, which is not their employer, effectively preempts and strips away teachers’ collective bargaining rights.

Yet the union itself is also to blame for rolling over as quickly as it did on the use of student test data. Teachers unions throughout the state should have resisted evaluation reform from the get go, not only in words, but through strikes and other job actions. By the time Cuomo started threatening the UFT most of the other NY teachers unions had already accepted similar reforms. Illinois has gone through a similar process and its teachers unions have also all buckled to the authority of the law.

The argument in support of accepting state evaluation reform laws—it is the law, we are law abiding teachers (and our union can’t afford the jail time, injunctions and fines for resisting it)—is completely irrational and absurd. If workers always obeyed unjust laws, we would not have weekends, child labor and worker safety laws, or even the legal right to form unions and go on strike. The idea that teachers must obey laws is rooted in teachers’ inaccurate self-identification as selfless nurturers and do-gooders, rather than as workers, with the same needs as any other worker (e.g., material security, protections from arbitrary and vindictive treatment, workplace safety). Lastly, the legal costs associated with resisting unjust laws may be far less than the vast sums unions spend to buy fickle, untrustworthy politicians. 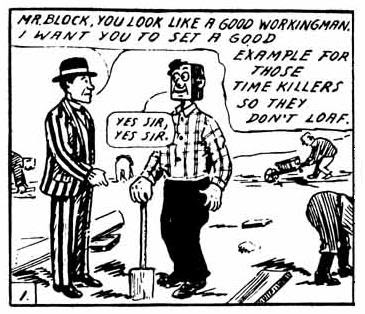 Blockhead NY Teachers Demand Harsh Treatment
Meanwhile, a group of blockhead (i.e., naïve workers who trust that their bosses have only their best interests in mind) NYC teachers have taken to the airwaves to demand the state impose a teacher-evaluation system, the New York Post reports. This particular group of blockheads are members of Educators 4 Excellence (E4E), which has created a 30-second ad calling on Albany to impose a new system on the recalcitrant union, the New York Post reports.

E4E, which has branches throughout the U.S., is an astroturf (i.e., fake grassroots) organization with corporate ties (they receive funding from the Gates and Carnegie Foundations) and members who are not even teachers. Consider that the New York ads are expected to cost more than $250,000—not something that the average teacher is capable of financing.

E4E wants the new evaluations to include multiple observations, “student growth data” and student surveys. Their first demand is reasonable. Observations of teachers in the classroom are the most accurate and direct way to assess teacher competence. However, few administrators have the time to do this often enough and many lack sufficient training to do it well. Without substantially increasing education funding, this is unlikely to change. Furthermore, administrators have an inherent bias, as they can manipulate the evaluations to punish or rid themselves of teachers who are outspoken critics of their policies, union activists or advocates for students and families. To have truly effective observation-based teacher evaluations, states need to train and fund objective, outside evaluators to do the job.

Student surveys can provide useful data to help teachers improve their practice, but they are terribly biased and fraught as a method for evaluating teachers. At the lower grade levels, children lack the maturity, experience and language skills to articulate whether their teacher was any good. They are certainly capable of describing whether their teacher was nice or mean, but they are not necessarily capable of determining whether they learned what they were supposed to learn. At the higher grade levels, students can use surveys vindictively to punish teachers who were strict or who refused to give them undeserved grade boosts, or to reward teachers who made it easy for them.
Posted by Anonimo