The History of the Modern School movement

The Modern School blog is named for the Escuela Moderna, which was created in Spain, by the anarchist educator Francisco Ferrer (1859-1909). His book, The Origin and Ideals of the Modern School, argued for the co-education of both boys and girls, as well as the rich and poor. During Ferrer’s days, the Spanish literacy rate was only 50% and all schools were church-regulated. Furthermore, the teachers at the Church-run schools brutalized students, emphasized rote memorization of Catholic dogma, and were hostile to any scientific and political thinking that displeased the Church.

"THERE must be a co-education of the different social classes as well as of the two sexes. I might have founded a school giving lessons gratuitously; but a school for poor children only would not be a rational school, since, if they were not taught submission and credulity as in the old type of school, they would have been strongly disposed to rebel, and would instinctively cherish sentiments of hatred." 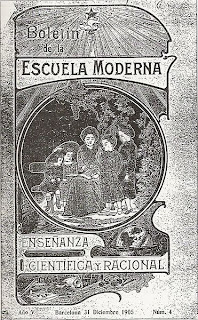 The first Escuela Moderna was opened in 1902, admitting both males and females, and both rich and poor students. The books were purged of all religion and the curriculum was fully secular. In a relatively short time, 40 more Modern Schools opened in Barcelona, while his textbooks were adopted by 80 other schools.

Not surprisingly, Ferrer was vilified by both the church and the state. In 1906, after an anarchist threw a bomb at the king, Ferrer was held responsible. His schools were closed and he was imprisoned, though he was eventually acquitted and he reopened his schools.

In 1909, the Spanish government began drafting soldiers to go to Morocco and help control the colony.  However, women began blocking the railways and the Committee for a General Strike called thousands of workers to strike in the Barcelona factories. Pacifists, socialists, anarchists and atheists all joined in. During the strike, 80 churches were burned down. (The Catholic Church had a long and terrible history of greed, brutality and oppression in Spain. They were one of the largest land owners and had amassed enormous wealth. They were also complicit in the impoverishment of the country’s peasants.)

The state responded with a week of terror and repression known as "The Tragic Week." They sent in artillery and reinforcements, eventually taking over the city of Barcelona and slaughtering over six hundred workers in the process. Though Ferrer was nowhere near Barcelona, he was nonetheless charged as being the leader of the insurrection. He was railroaded by a kangaroo court and executed in 1909.
From his prison wall Ferrer wrote:
"Let no more gods or exploiters be served. Let us learn rather to love each other."

When facing the firing squad he said:
"Aim well, boys. I know this is not your fault. Long live the Modern School!"


Birth of American Modern Schools and the Francisco Ferrer Association
Ferrer's execution led to worldwide protests. Modern Schools started to pop up outside of Spain, inspired by his original Escuela Moderna. After his death, more than 200 were started in Spain and 20 opened up in the US, including one in New York City that eventually moved to Stelton, New Jersey. The U.S. Modern Schools continued until 1958.
American Modern Schools were designed to counter the discipline, formality and regimentation of traditional American schools. The schools were run by working people for the children of workers. The schools were designed by anarchists who sought to abolish all forms of authority, including educational, with the goal of creating a society based on free association and free thought.

In 1910, Anarchists formed the Francisco Ferrer Association (which later became the Modern School Association of North America), to spread Ferrer’s teachings and build a network of American Modern Schools. Charter members included Emma Goldman, Leonard Abbott and Harry Kelly. By the time of the First World War, Modern Schools were operating in Philadelphia, Detroit, New York, Seattle, Portland, Chicago and Salt Lake City, with more soon to follow in San Francisco, Los Angeles, Boston and Paterson. Classes were taught in English, Yiddish, Czech, Italian and Spanish. While most of the Modern Schools only lasted a few years, the Stelton school lasted for four decades.Some of the students at the original New York Modern School were photographer Man Ray and Margaret Sanger's son.

Modern Schools emphasized learning by doing, as well as crafts and reading. Rigid curricula, rote memorization and regimentation were not permitted, nor were rewards and punishments. Modern School teachers and supporters believed that learning must be free and felt that children needed to decide for themselves what to learn and how to learn it. They also believed that learning was a life-long process that never ended. Therefore, parents and other adults were encouraged to participate in the operation of the schools and to attend evening and weekend lectures.  Some of the speakers included Clarence Darrow, Elizabeth Gurley Flynn, Jack London, Upton Sinclair and Man Ray. The schools also served as cultural centers for the promotion of unionism, free speech, sexual liberation and anti-militarism.

In 1914, the progress of the schools was temporarily interrupted by political violence. After the militia attacked miners’ families in Ludlow, Colorado, in April, 1914, killing 12 children and two women, a number of anarchists decided to seek revenge on John D. Rockefeller, owner of the mines. A plot to assassinate Rockefeller was hatched by Alexander Berkman (a former lover and friend of Emma Goldman’s) at the New York Ferrer Center. A bomb exploded prematurely, killing three anarchists. These events led to infiltration of the school and center by undercover cops. Visitors and families stopped coming to the school. As a result, organizers decided to move the school to rural Stelton, in 1915.