Eat the Rich (Before They Eat You!)

As the Fat Cats sat around their banquet tables, with their cigars and 30 year old cognac, eating foie gras and caviar, while the rest of us ate turkey (if lucky), they were giving their thanks for their prudent investments in the politicians who supported the trillions of dollars that bailed out the economy, so that they could earn $1.66 trillion in profits this past quarter. Over their Kopi Luwak coffee they shed a few crocodile tears for the have-nots, and exchanged a few chuckles at the suckers who bought their promise of more jobs in exchange for tax breaks and subsidies.

So how has the Great Recession affected the rich? Annual bonuses rose by 11% for bosses at the 450 largest US corporations last year, according to the Wall Street Journal. Shareholder returns increased by 29%. Forbes magazine says that 400 richest Americans increased their net wealth by 8% in 2010, to $1.37 trillion. 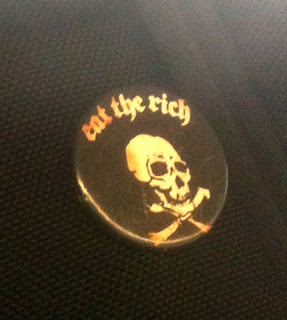 How has the Great Recession affected the rest of us? Many more are now going hungry, living without healthcare and surviving on reduced income. 15% of all US households, 50 million people, didn’t have enough to eat in 2009.  One million children went hungry on a regular basis. According to the Centers for Disease Control (CDC), 49.9 million adults went without health insurance, up from 46 million in 2008. 26% of the adult population is now uninsured, up from 24.5 percent in 2008. According to the Social Security Administration, the median annual wage fell by $247 to $26,261. The Census Bureau says that in 2009, there were 44 million Americans living in poverty, an increase of 3.8 million from 2008. At the end of this month, unemployment benefits expire for 1.2 million workers due to Congressional inaction. By the new year, this figure will rise to 2 million.
Posted by Anonimo