The Fred Phelps Circus: Coming to a School Near You 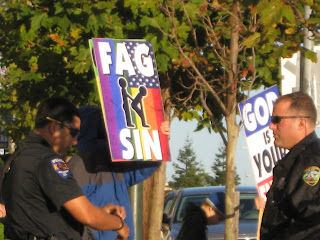 The Reverend Fred Phelps sent his God Hates Fags.com circus to my school. As expected, there were only three of them, while close to fifty former students and community members counter demonstrated peacefully across the street. Where were the current students and teachers, you ask? They were cloistered in the central courtyard of our school, eating donuts provided by the administration, having a safe, litigation-proof pep rally against hate. 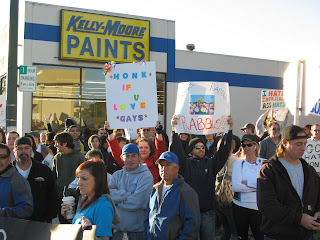 Don’t get me wrong. A pep rally on campus is one of many fine responses, but plenty of teachers and students, including the Gay-Straight Alliance, wanted to hold a counter demonstration in front of campus, as a public display of our opposition to bigotry and homophobia.As the date of the protest got closer, however, more and more teachers were expressing reservations about being out front. People who had initially supported the counter demonstration were now arguing that any presence at all was just giving the bigots what they wanted. Others were concerned that by being in front of campus we would be giving the green light to students who, as everyone knows, have no impulse control and would certainly do something stupid, like hitting a bigot or throwing things at them. 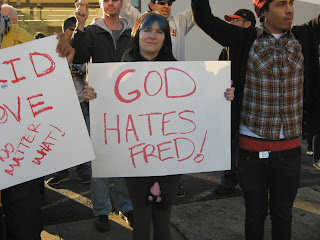 The change in opinion on campus followed a series of administrative emails and emergency faculty meetings, all of which echoed the same story: “These people are lawyers who deliberately provoke people in order to sue them. We need to keep our students away from them. Besides, their ideas are so far from the mainstream that they are best ignored.” Yet their primary message is that homosexuality is evil, which is not only a mainstream idea, but one that has inspired a national dialog in the wake of several well-publicized suicides by gay youth. 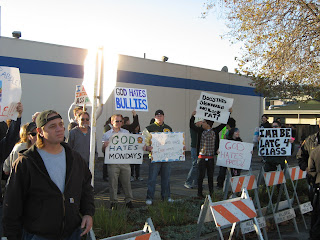 My colleagues mostly bought the argument that Phelp’s cult funds itself through lawsuits. While this is a popularly held belief, there is little evidence to support it. The truth is that nearly every one of Phelp’s eleven children is a successful lawyer. They all donate heavily to his church. There have also been several successful lawsuits against his organization, and only a few in his favor, which would make it a very insecure funding source.
Staff also bought into the stereotype that teenagers are impulsive and irresponsible and would likely get themselves into trouble if allowed to exercise their free speech rights. While there are certainly some students at our school who would be inclined to assault the bigots, they had been well trained over the preceding week to not engage with them. More significantly, the actual protest was three blocks from campus. The police had set up barricades separating the protesters from the counter protesters and were not allowing anyone from either group to get near each other. The actual risk to the students in front of campus was negligible.
We had a wonderful opportunity to teach students about free speech, free assembly, solidarity and protest. It was a chance to discuss how free speech means that even crazy ideas get to be expressed, notions like government death panels or teachers unions are destroying public education, but when such ideas are unopposed, eventually people believe them. Instead, we reinforced the ideas that teenagers are fragile, untrustworthy and must be sheltered from all risk.
Posted by Anonimo