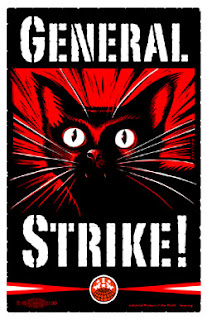 In the largest demonstration in Wisconsin’s history, over 100,000 workers, farmers and students marched in the state capital of Madison, Saturday, against attacks on unions and cuts to education, health care and other services. The day before, Gov. Walker had signed into law his “budget repair bill,” stripping most of Wisconsin’s 300,000 public employees of collective bargaining rights.
Class War
The media and politicians never use the words “working class,” and seldom even mention poverty or homelessness. The unions, too, are infatuated with the delusion that we live in a monolithic middle class nation. Such misrepresentation of reality only serves the interests of the ruling class. It distracts attention from their aggressive attacks on the living standards of the poor and working and middle classes, and it diffuses working class solidarity and militancy against ruling class power.
Despite the unions’ pathetic capitulations and class betrayals, the militancy of the demonstrators has grown, with increasing numbers of workers recognizing that their protests are part of the class struggle. Chants and signs have referenced general strikes, class war, taxing the rich, and reversing the wage and benefits cuts.
Video: Wisconsin Workers Talk About the General Strike (from the WSWS)
Class Traitors
Wisconsin’s mainstream unions quickly threw in the towel and completely surrendered to the Republicans, both by conceding to Walker’s demands for pay and benefits cuts and by telling workers to behave themselves and to go back to work. Indeed, they have been actively working to divert worker rage and solidarity by redirecting their energy into a vapid campaign to recall the Republicans and bolster the Democrats in the state legislature. The 14 Democrats who had fled the state in order to delay the union-busting were treated like heroes by the unions despite the fact that they had presided over the deepest spending cuts in state history—hardly the behavior of real working class heroes, (but a good indication of the unions’ true allegiances). In fact, the Democrats joined the unions in their demands that the protesters return to work and focus on the ballot box.
Why would the union leaders so brazenly betray their own members? The most important reason is self-preservation. In order to maintain their 6-figure salaries and their sleazy relationships with Democratic lawmakers they need to preserve the automatic dues check-off that funnels money directly from workers’ paychecks into their coffers, and indirectly into the hands of lawmakers. Proof of this can be seen in the cowardly and desperate contract signed by Madison Teachers Inc. on Saturday. The union, which represents 2,700 teachers and other school employees, conceded to a wage freeze, increased health premiums, and increased out-of-pocket pension contributions equal to those demanded by Walker, in exchange for a temporary continuation of the automatic dues check-off (under Walker’s bill such deductions are prohibited once existing agreements expire).
Unions Stupidly Insist On Playing Losing Game
While the unions continue to act as though the political game is the only game in town, they have already been ejected and sent home, at least in Wisconsin. Without the automatic dues check-off, unions will be severely limited in their fundraising efforts, thus hampering their efforts at kicking the Republicans out of office. Even with the dues check-off, unions cannot compete with the bottomless purses of corporations. In 2009-2010, corporations outspent unions by 13 to 1 in Wisconsin.
To add insult (and what should be seen as humiliation) to injury, Wisconsin Senate Majority Leader Scott Fitzgerald made it abundantly clear that the goal was to eviscerate the union-Democratic Party machine. “If we win this battle, and the money is not there under the auspices of the union, what you're going to find is President Obama's going to have a much more difficult time getting elected and winning the state of Wisconsin.”
Posted by Anonimo