September 28, 1864 – The International Workingmen's Association (IWA), the first Communist International, was founded on this date in London.
September 28, 1917 - Federal agents arrested 165 Wobblies (members of the Industrial Workers of the World) for their resistance to World War I. Over 300 IWW leaders were arrested in September and their offices raided throughout the country. Of course their real crime was continuing to engage in labor strikes and slowdowns, despite the war propaganda. (From Workday Minnesota) 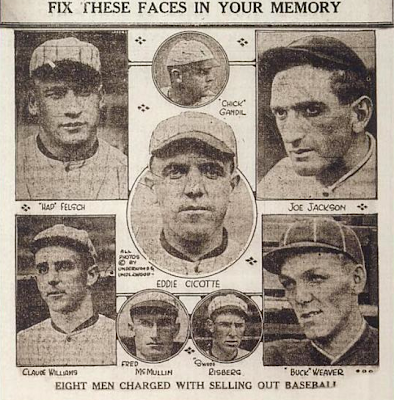 September 28, 1920 – Eight members of the Chicago White Sox were indicted by a grand jury for conspiring with gamblers to throw the 1919 World Series in what became known as the Black Sox Scandal. The players were acquitted by the jury, but they were still banned for life from professional baseball. (From the Daily Bleed)
September 28, 1920 -- Throughout September there were widespread occupations of Italian factories by workers. The actions originated in the auto factories, steel mills and machine tool plants, but spread to many other industries, including cotton mills, hosiery firms, lignite mines, tire factories, breweries & distilleries, steamships and warehouses in the port towns. (From the Daily Bleed)
September 28, 1971 – After years of corporate plunder, the Chilean government expropriated Anaconda and Kennecott copper mines, pissing off American capitalists and setting the stage for the CIA supported coup of 1973, which lead to the brutal Pinochet dictatorship and 17 years of repression and violence. (From the Daily Bleed)
Posted by Anonimo