In honor of Modern School's first anniversary, I am reposting some of my favorite pieces from the past year. This one was particularly fun to write as I have fond memories of reading Curious George as a child and as a father, even though I find the messages in the stories to be rather perverse. I also really like the creepy video of Werner Herzog interpreting Curious George. 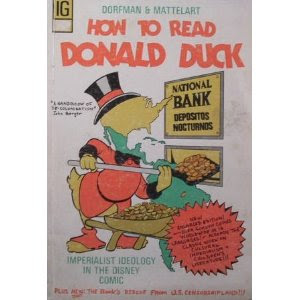 For those not in the know, the title of the post was a reference to Ariel Dorfmann's "How To Read Donald Duck."


How To Read Curious George
My 4-year old son loves Curious George. For the past year, we’ve read Curious George almost nightly. It should be obvious why kids enjoy these stories: George is like a small boy, curious, innocent, naïve and playful. He adores his “daddy,” the man with the yellow hat. He has exciting adventures and sometimes has pitfalls, like a broken leg, from which he always comes out on top.
However, there is a darker side to the Curious George stories. Consider that in the very first story, George is kidnapped from his native Africa by the man with the yellow hat, ostensibly to be sold to a zoo. Yet, instead of rebelling or retaliating or becoming despondent, George’s curiosity and innocence prevail, and he grows to love his kidnapper, the man with the yellow hat.
In subsequent stories, George is forced to wash dishes by a “nice” cook, who then donates him to a window washer who convinces George to clean a skyscraper without pay. A circus man fixes George’s broken bicycle to entice him to become a carny, again without compensation. In one story, a scientist sends George on a rocket ship death mission, because it would be too dangerous or expensive to send a human.
In the real world, of course, animals are exploited in these ways, but Curious George is metaphorically a little boy. Most kids would be thrilled to ride in a rocket ship or do tricks at the circus and wouldn’t think twice about the risks or lack of compensation, until it started to get dark and they realize they may not see their mommy or daddy again. Soon, the drudgery, pain and anguish of their new life would set in.
There is another sinister aspect to these stories. Like a little boy, George is constantly getting himself into trouble, usually because he did not follow instructions. He is always forgiven, but not until he risks his life or does something crazy, to win back the love or forgiveness of his adult handlers. In Curious George Rides a Bike, he must climb a tall tree to rescue a baby bear in order to win back the circus man’s love and the right to perform in his show. In Curious George Flies a Kite, he must hold onto Bill’s kite as he is rescued mid-air, in order to win back Bill’s affection and a pet bunny. In Curious George Gets a Medal, he must volunteer to be the first living thing to travel in space in order to win his freedom and the respect of Professor Wiseman.
Of course I’ll continue reading these stories to my boy until he tires of them (which will hopefully be soon, since we both have memorized every single line). Mixed with the terrible messages of Grim and Mother Goose, I’m sure he’ll grow into a healthy, normal, upstanding member of society.
Posted by Anonimo