This is What Democracy Looks Like--No, Really! 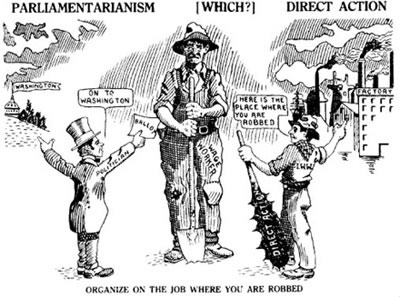 This is What Democracy Looks Like—Literally!
“This is what democracy looks like!” the occupy movement has been proclaiming proudly.
The irony is that while they demonstrate direct democracy and people power in the streets and in their encampments, they are also demonstrating the complete and utter failure of official state democracy to deliver what they believe it should (thanks to my friend at Ruthless Criticism for drawing my attention to this).
The fact that they have been forced to take over public spaces in order to gain attention in hopes of forcing their representatives to “do what’s right” ought to alert everyone to the fact that their representatives do not represent their interests at all, and cannot since democracy is designed to protect the interests of the wealthy and not the 99%.
Indeed, democracy is precisely about ensuring that the 99% are perpetually screwed by the 1%. The 99% are required to work for low wages and long hours for the 1% to create their wealth. They are required to purchase the goods and services sold by the 1% in order to increase their wealth. They are needed to fight the wars that help secure raw materials and cheap labor for the 1%. And the 99% consent to this exploitation and oppression through the annual ritual of voting, during which time they give their official approval to be ruled by leaders who represent the interests of the wealthy.
While this ritual gives people a sense of empowerment by allowing them to participate in the political system, it does not give them any real power or control over their own material well being. And though it occasionally allows them to complain about the economic system, it does not allow them to change it. Regardless of who is in power, whether Democrat, Republican, Green or Socialist, the system will continue to keep the rich wealthy and the rest of us subservient.
While voting allows people to feel empowered, they have been feeling less empowered lately as they watched their leaders unabashedly hand over billions of their tax dollars to the wealthy while they lost their jobs and homes. This is nothing new—it’s been going on since the earliest days of the state. But it is particularly obvious right now, with unemployment lasting longer than any time since records have been kept.
Somewhere the 99%-ers got the silly notion that the government ought to protect the people, to work for them, to treat them fairly, to give them an equal footing. Yet the government does provide an equal footing—it’s capitalism that unlevels the playing field. Democracy allows all Americans to be homeless or to sleep in shelters, as it allows anyone to strike it rich. The problem is that in order to be successful in business, one generally needs connections to acquire the necessary funding, something the wealthy are more likely to have, both through inherited wealth and through existing family and social connections and expertise. They are also more likely to graduate from an elite school, giving them more advantages in the business and political arenas.And yes, the political rulers do make laws that make it easier for the wealthy to maintain and grow their wealth.
Of course this notion of being treated fairly begs the question of what is fair. Is it fair that there are billionaires or millionaires at all? Is it fair that hundreds of thousands of Americans are homeless and 20% of all children go hungry on regular basis? What if no one was homeless or hungry, would it then be fair for 1% of the population to have multiple mansions, boats and monthly vacations in Monaco? Would it be fair for the bosses to make 100 times what their employees make instead of 10,000 times, even if the employees continued to have little control over their working conditions, could still be fired at will, and continued to have the higher rates of stress, diabetes, heart disease and hypertension that tend to go with it?
The Revolution IS Being Televised Because It's Not A Revolution
The occupy movement, to its credit, has captured the hearts of millions throughout the world and given a sense of empowerment to many at a time when people have been feeling terribly disempowered. However, a sense of empowerment is a far cry from holding actual power, something that the 1% still monopolize and will continue to monopolize until the rest of us take it from them. Unfortunately, this cannot happen simply by occupying public spaces or even voting, and it certainly won’t happen by demanding a 1% tax on stock transactions.
This is one reason why the movement has garnered so much positive press. It is not threatening or challenging the monopoly on power and wealth held by the 1%. Rather, it is simply asking that they pay a tiny bit more in taxes. At the same time, they are mostly behaving themselves in a manner considered acceptable by society (and the wealthy). They are not organizing and mobilizing workers to take over the factories and farms. They are not blockading private companies or preventing people from going to work. They are not slowing down production or cutting into profits.
They are, however, putting a real face on suffering. The media has been interviewing and photographing participants who are unemployed, who’ve lost children in Iraq and Afghanistan, who’ve lost their homes, who are saddled with unprecedented levels of college debt and no hope of employment in the foreseeable future.
This too might seem like a victory for the movement. However, not only is this unthreatening to the ruling elite, it is exactly the kind of public interest story the media love. Suffering sells papers. Neighbors coming together to support each other sells ad time. In many ways, the occupy movement is a classic “feel good” story—at least it has been so far. 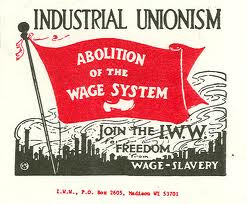 Of course there is still potential for it to evolve and become something quite different, like a general strike. While it is unlikely that large numbers of Americans will suddenly start demanding an end to wage slavery and bosses entirely, it is possible that, instead of demanding jobs, regardless of how terrible, low paid or dangerous, as the mainstream unions have done, workers might make reformist demands like shorter hours, free universal health care, middle class wages, more sick and vacation leave, safer working conditions, and guaranteed middle class pensions for all. 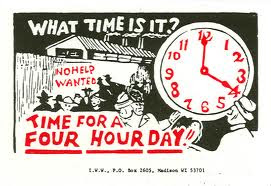 While this would still leave the 1% far wealthier than the rest of us and still completely in control of social and economic power, it would have a much more immediate and noticeable effect on working Americans than the nebulous demand that politicians do their jobs or that the rich pay their share.
Posted by Anonimo