Off With His Head

Ostentatious Wealth and Grandiose Ignorance
Protesters chanting “Off With His Head,” attacked Prince Charles and his wife Camilla Wednesday, as his chauffer idiotically attempted to maneuver his Rolls Royce through a demonstration of thousands of angry students. Protesters threw paint, smashed a window, and hurled sticks at the royal couple, as they attempted to make their way to the theater. Throughout the ordeal, The Royal Moron continued to smile and wave, even proffering the thumbs-up, as if completely oblivious to the fact that he and his ostentatious vehicle symbolize precisely the sort of parasitic wealth that was fueling the students’ anger. 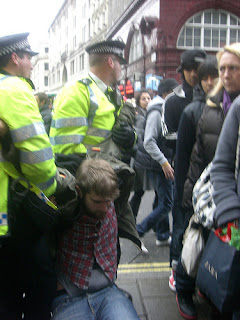 Cops Bash in Student’s Brain
The protest had started outside parliament and was immediately met with extreme police brutality. Riot cops “kettled” protesters in Parliament Square, trapping them within a police cordon, and assaulting them on foot and on horseback. Alfie Meadows, a 20-year old student, was carried away unconscious, with serious head injuries. He later had to undergo emergency brain surgery. A student with cerebral palsy was dragged from his wheel chair and roughed up, too. He told journalists that their obsession with violence was not only misleading the public (thousands of protesters had broken free of the police cordon and continued to march peacefully, without incident), but it was fanning the flames of police violence against students, by making it seem deserved.
It should be noted that millions of students have been protesting peacefully across the country against the trebling of university fees. High school and middle school age children have been joining the protests. Students are outraged not only by the fee hikes, but the host of austerity measures being hoisted upon the British people in order to pay for a budget deficit caused by government and corporate irresponsibility and greed.
The media have characterized the students as violent, anarchic and naïve. Prime Minister David Cameron said that the protesters “came determined to provoke violence. . . They must face the full force of the law.”
Yet it is the government who should take responsibility. The violence was provoked by the police, not the protesters. The cops “kettled” protesters, detaining everyone in the vicinity without charge or access to food, water and toilets, and then they assaulted them. People act outraged that protesters attacked the prince, yet if the police had done their homework, they should never have allowed the prince to drive through a mass protest.
The Escalating Class War
The extreme police violence meted out against protesters, and the government and media frenzy to justify it, all come at a time of rapidly growing popular discontent throughout Europe and the U.S. Student protests in Italy have also been savagely attacked by police, while workers and students have also been assailed in France, Germany, Spain, and Ireland in recent months.
The ruling elite recognize that they have crossed a line in terms of the brazenness and greed of their looting and pillaging. They are expecting increasing opposition and they are ready to use as much force as it takes to defend their property and their profits.
Will American Students and Workers take to the streets in similar numbers when the austerity measures really hit here?
Posted by Anonimo