Worst Time Ever to Be A Teacher

The Center for the Future of Teaching and Learning released a report Monday saying that California is “facing the gloomiest outlook for the teaching profession in a very long time.” The research for the report was conducted by SRI International, at Stanford University. “California’s fiscal crisis has so severely damaged the pipeline for recruiting and training new teachers that the quality of the teacher workforce has been put at risk for many years to come.” 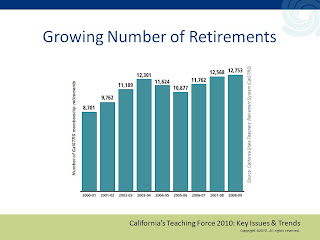 Not only is the state failing to recruit and train new teachers, it is also losing its existing teachers at an alarming rate. About 26,000 teachers received layoff notices last spring and over half these (14,000) were not rehired in August. The state is also losing teachers to attrition at an alarming rate. One-third of the state’s 300,000 teachers are over 50 and close to retirement. Within a few years, there will be huge teacher shortages.
Working conditions have deteriorated so much that many teachers are trying get out of the profession as soon as they can. In 2009-2010, 16% of school districts in California shortened their school years, thus reducing instructional minutes for students and take-home pay for teachers. Class sizes have increased by as many as 10 students, thus increasing the workload and the number of daily student interactions. 48% of districts cut counselors, nurses and or psychologists. 29% of districts cut classroom aids. BTSA support has been cut by 30% since 2007. “Teachers are expected to do more, and do so with fewer resources,” the report said. “It is not hard to understand why many teachers feel under siege.”
California is also doing little to recruit and train new teachers. According data from the California Department of Education, in 2000-2001, there were 45,829 1st and 2nd year teachers in California. By 2009-2010, it had dropped to only 18,164. . The number of people enrolled in teacher training programs in California has dropped from 77,705 in 2000-2001, to less than 45,000 students in 2007-2008. The teacher training schools are also experiencing cuts, which diminish their ability to train new teachers. Credentialing programs have implemented hiring freezes, especially for tenure track professors and they are hiring fewer temporary professors. 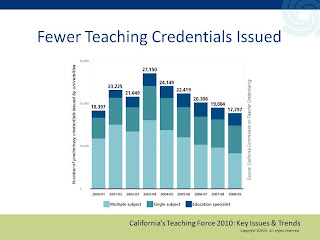 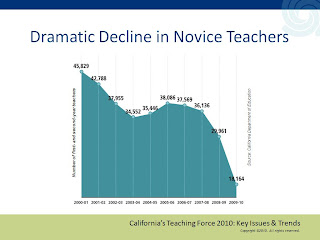 While the report lays solid blame on economic conditions for the crisis, it lets policy-makers completely off the hook. “It is a hard and complex task for California policymakers to help guide the teaching profession with skill. In part, they have little control over a damaged economy that has played havoc with school budgets.”
In reality, they have considerable control. What they lack is balls. It’s really quite simple: tax the hell out of the rich and corporations. Empty the prisons of nonviolent offenders. Abolish the death penalty, which is seldom used, but costs the state far more than holding murders in prison for life. Make the petroleum companies pay royalties for the oil and gas the extract in California. Tax marijuana, junk food, alcohol.
Posted by Anonimo