Sabotage, As American As Apple Pie

This Monday, on the public radio program Marketplace, host Kai Ryssdal mentioned that U.S. businesses will lose $1 billion over the next few weeks because of employees doing their holiday shopping on the internet at work instead of doing their jobs.
The OWS movement might learn something from this.
Their calls for people to stay home on Black Friday were not only ignored, but this past Friday ended up being one of the busiest retail shopping days ever.
My guess is that people have recession fatigue and desperately want to celebrate the holidays like they used to, whether or not they have jobs or economic certainty. They want this so badly that they are willing to risk their jobs by doing their shopping on the boss’ dime.
While most are not doing this deliberately to undermine the profitability of their employers, it is a consequence of their behavior. Workers do this all the time in other subtle and not so subtle ways and for various reasons including dissatisfaction with the job, boredom and revenge. They do things like taking home office supplies, extending their lunches, surfing the internet and corresponding with friends via email. People sometimes pad their time cards or prolong their time in the toilet or at the coffee machine.
All of these are forms of sabotage and it is as commonplace as work itself. 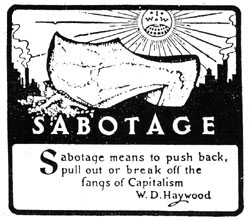 The IWW (Wobblies) promoted sabotage as a tactic to help workers win their grievances at work, by slowing down efficiency and profit-making. Their propaganda often included the image of a sabot, the Dutch shoe that workers often threw into the looms during the 19th century to slow down production. In fact, the word sabotage comes from sabot. The Wobblies used the word sabotage to include any tactic that slowed down efficiency, including deliberately slowing down production, working to rule, bungling duties.
Considering that the majority of Americans do not seem ready to join the OWS movement in the streets and encampments, nor do they seem ready to boycott holiday shopping, perhaps a better tact for the movement would be to follow the example of the IWW and call for mass acts of sabotage in the workplace. 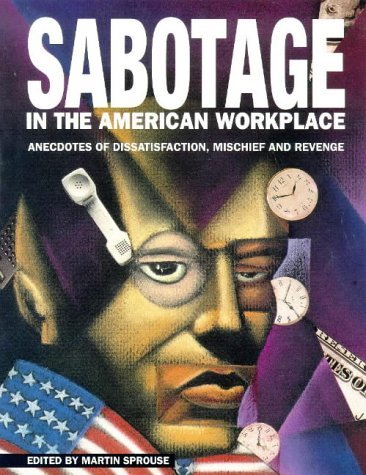 For those who are lucky enough to have jobs and who can’t afford to lose them by playing hooky to join an OWS protest, there are plenty of things that can be done at work to gum up the machinery of capital and cut into profits with minimal risk. The options are virtually infinite with a little creativity and caution. Numerous examples can be found in Martin Sprouse’s book, “Sabotage in the American Workplace.”
Posted by Anonimo