The Bipartisan (and Union) Assault on Tenure 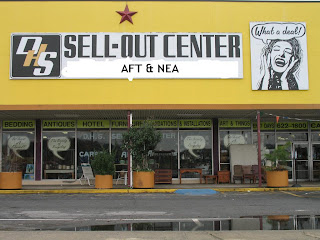 Last year, President Obama called for teachers to be rewarded for their “effectiveness,” a call he repeated last week in his State of the Union address. He propped up these calls with Race to the Top (RTTT), which offered states large bribes (which he euphemistically called grants) for facilitating privatization schemes and for undermining tenure and seniority by tying teacher evaluations to student achievement.

Republican Governors in Florida, Idaho, Indiana, Nevada and New Jersey have called for the elimination or dismantling of tenure, with anti-tenure bills in the works in those states and in several others. Michael Bloomberg has been pressuring Democratic Gov. Andrew Cuomo to dismantle tenure in New York. Democratic LA Mayor Antonio Villaraigosa wants to make it easier to fire ineffective teachers. Michelle Rhee, also a democrat, has made tenure abolition one of the cornerstones of her anti-education StudentsFirst movement, having advised the governors of Florida, Nevada and New Jersey. With debilitating budget deficits putting teachers unions on the defensive, many believe that such measures stand a good chance of passing.
Both national teachers unions, the National Educators Association (NEA) and the American Federation of Teachers (AFT) have declared support for some sort of tenure “reform.” The AFT, for example, endorsed a law in Colorado last year that made it much easier for administrators to remove tenured teachers and that tied teacher evaluations to student achievement. And many locals have also voluntarily given up tenure protections and/or seniority rights. Keith Johnson, embattled boss of the Detroit Federation of Teachers, recently negotiated a contract that gave up seniority rights. The Chicago Teachers Union, Illinois Education Association, and Illinois Federation of Teachers endorsed “Accountability for All” which links tenure to classroom performance, measured in part by student achievement.
It’s important to remember that tenure doesn’t guarantee a teacher’s job; it guarantees due process so they aren’t fired arbitrarily or vindictively, or because of their race, sex, political views or cronyism. Ironically, New Jersey was the first state to pass a tenure law back in 1909. Also, the entire debate about tenure reform is predicated on the false premises that there are a lot of bad teachers and that poor student achievement is caused by all these bad teachers. Tenure reform is a red herring.
They Really Want to Dismantle Tenure Because It Will Allow Administrators:
Posted by Anonimo