Schools Are Jails (Piss Buckets For Your Kids’ Safety)

In the wake of two recent school lockdowns, LAUSD is now requiring all LAUSD classrooms to have a “lockdown kit” that includes a 5-gallon bucket to be used as a toilet. Kits also include toilet paper and a portable toilet seat, as well as first aid equipment, duct tape, gloves and flashlights. The shit buckets were apparently used by some students last week, who were locked in their classrooms for hours while cops and school officials ran around like chickens without heads. 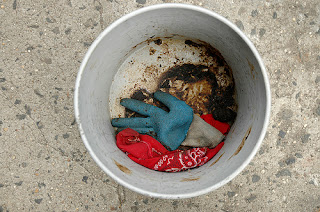 As appalling as it is to think that school districts now consider violent school rampages so routine that classrooms must be equipped with bucket johns, it is even worse when they start to treat any disturbance as cause for a full scale lockdown and use lockdown procedures as a form of social control.
In the case of the Gardena shooting last week, a student brought a gun to school. It accidentally discharged when he dropped his backpack and two students were seriously injured. While this was a terrible tragedy and there was certainly need for emergency procedures, there is no reason why the entire school needed to be locked down for hours. There were no hostages, intruders or armed suspect rampaging through the school. The incident was self-contained. The room in which it occurred should have been quickly secured so that emergency workers could attend to the injured students and police could question witnesses. Once this had been accomplished, the rest of the school should have been allowed to return to their routines, or dismissed.
In the Woodland Hills case, police were searching for an armed assailant who had shot and wounded a school cop, near El Camino Real High School. Students from nine different schools were locked down for up to five hours as officers searched for the suspect. While it may be justified in cases like this to keep classrooms locked down for student safety, LAUSD’s own police chief, Steve Zipperman, admitted that students were locked down longer than necessary. LAPD and LAUSD blamed each other for the miscommunication and lack of coherent plan.
In both cases, students’ hygiene, dignity and wellbeing were sacrificed by police and school officials, not to protect children, but to make the grownups’ jobs easier.
Posted by Anonimo