The Wealth Gap is Making Us Sick

The Centers for Disease Control (CDC) has just issued the government’s first report ever on the health disparities caused by social inequity in the U.S. In general, lower-income residents reported fewer average healthy days and more illness than wealthier individuals.
Between 1981 and 2006, the number of pre-term births increased from 9.4% to 12.8%. Infant mortality and pre-term births are linked to the ability of mothers to obtain adequate nutrition, health care and social support before, during and after birth. Smoking, which is much more common among lower income Americans, also increases the risk of premature births and infant mortality.
Families living at or below the poverty level were five time more likely to live in “inadequate” housing (flaking lead paint; defective or nonexistent smoke detectors, wiring or plumbing; mold; rodents; leaks) that increased their exposure to toxins and pathogens. Approximately 5% of American families are living in such inadequate and unhealthful housing.
The number of people without health insurance rose from 31 million in 1987 to 47 million in 2006, and 52 million last year. Because of their lack of insurance, many of these people did not get preventative health care or treatment for mild and chronic diseases, causing them to progress to life-threatening situations. Not surprisingly, the highest rates of hospitalizations were in the poorest communities, with African Americans having highest rate of preventable hospitalizations. Meanwhile, record numbers of hospitals and emergency rooms have been closing.

The data below comes from the Unnatural Causes video website. I highly recommend this video series. 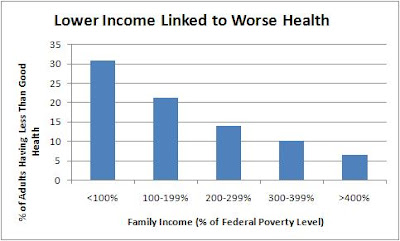 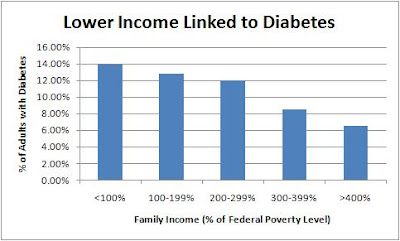 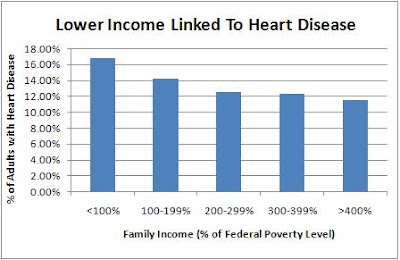