In Parts I and II I discussed the biology, morphology and genetics of influenza and how the virus makes people sick. In Part III I will talk about various influenza pandemics that have occurred over the past century and the development of Highly Pathogenic Avian Influenzas (HPAI).

Seasonal flu does not usually kill many healthy adults and morbidity declines with age. Adults have already been exposed to several strains in their lifetimes and have developed immunity to many of these. Further, as far as scientists are aware, highly pathogenic strains, such as the H5N1 avian flu, do not yet have the ability to easily infect humans. So, why should anyone worry about deadly flu pandemics?

It is true that H5N1 cannot yet pass easily from person to person. However, as a result of antigenic shift, it could acquire a hemagglutinin that allows easy transmission between people. Alternatively, a flu strain such as H1N1 that is already easily transmissible between humans, but that is currently not especially deadly, could acquire virulence from another strain through antigenic shift. If either of these scenarios were to occur, we could see a repeat of 1918, with a new strain that is highly transmissible, extremely lethal, and for which we lack immunity.3(p16) It should be remembered that the 1918 pandemic began with relatively low virulence, and then returned in a much deadlier form.

On average, a significant antigenic shift has occurred each generation, producing a new pandemic strain.3(p11)

Even without high mortality, influenza can still be enormously costly to society. For example, over $10 billion has been spent and over 200 million birds have been slaughtered in efforts to contain H5N1, which at this point has killed very few people.10   With highly transmissible strains like the recent H1N1 swine flu, which was not particularly lethal, there can still be high numbers of infections that keep many people home from school and work. At the beginning of the swine flu pandemic of 2009-2010, President Obama’s Advisory Council on Science and Technology warned that up to 50% of the population could contract the disease.17 Had this happened, there could have been shortages of food, medicine and water due to high absenteeism and the impact on the economy could devastating. 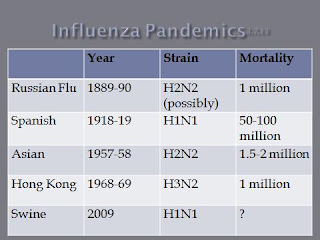 The 1919 Spanish flu pandemic was the deadliest and most devastating pandemic ever. However, it primarily killed those under the age of 60. It is thought that those who were over the age of 60 at the time of this outbreak had developed partial immunity due to past exposures to related viruses. However, it is not currently known for certain what strain the Russian flu was or how it related to the 1919 strain. Jeffrey Taubenberger, of National Institute of Allergy and Infectious Diseases, says that every major human flu strain in the past 90 years has been a member of the 1918 family, each built on the same basic framework of the 1918 H1N1 strain.6 This may explain why there has not been a pandemic since then with comparable mortality and morbidity rates: constant re-exposure to its relatives has primed our immune systems.6

In 1947-1948 a mutated version of the 1919 Spanish flu reappeared and sickened hundreds of millions of people. Fortunately, it had lost much of it virulence and mortality rates were similar to seasonal flu.3(p33)

In 1976 there was a swine flu scare, based on the reappearance of H1N1.13(583) The CDC warned that the 1918 strain had returned, creating panic by many governments. In reality, however, both mortality and morbidity were low. It has since been shown that the CDC’s warning was exaggerated and premature.6 As a precaution, the U.S. government launched a massive vaccination program. There was much criticism of the Ford administration for its “wasteful” and “unnecessary” vaccination program; however, many flu experts argue that it is better to have a vaccine without a pandemic, than a pandemic without a vaccine.3(p43)

The recent pandemic of H1N1 turned out to have relatively low mortality, mostly among the young. One possible explanation is that exposure to post-1918 H1N1 strains, especially 1957-8, primed older peoples’ immune systems.6 A study by the CDC found that over 50% of people who received the 1976 swine flu vaccine had powerful immune responses to the 2009 H1N1 virus, while those who did not receive the 1976 vaccine had weak immune responses to the current vaccine. 6 Perhaps Ford’s swine flu vaccination program was more beneficial than we realized. 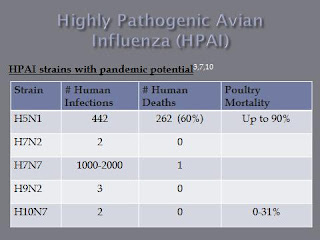 So far, we have been spared a repetition of the devastating 1918-1919 pandemic. However, this does not mean we should assume that 1918 was an historical aberration that will not occur again. An antigenic shift combining human and avian antigens could still result in a devastating modern pandemic.

Many varieties of highly pathogenic avian influenza (HPAI) have arisen over the past twenty years. Some, like H5N1, have extremely high virulence when they infect humans.3,7,10 For many of these strains, humans have no immunity. Therefore, if one of these HPAI strains were to acquire the ability the easily infect humans, we would likely see both high morbidity and mortality, like in 1918.

H5N1 has already acquired the ability to infect mammals (80 Bengal Tigers died in Bangkok zoo after eating raw chicken, and there have been some cases of house cats transmitting it to each other.3(p122) So far, there have been 442 human fatalities from H5N1, including several cases in which person to person transmission is suspected. If H5N1 becomes easily transmissible and maintains its present mortality rate, some estimate that one billion people could die.3(p125)

An H7N7 outbreak in Holland, 2003, led to the slaughter of over 30 million birds (one-third of the entire Dutch poultry industry).3(p85-87) H7N7 is particularly alarming because it not only infects birds, but a variety of mammals, including seals & horses.7  It also infected as many as several thousand poultry workers and their family members and neighbors, mostly in Holland. Fortunately, this strain seems to have a hemagglutinin that allows infection the human conjunctiva, but not the respiratory tract, and has thus far shown very low lethality in humans.7

There are currently HPAI strains of H5, H9 and H7 circulating in domesticated poultry, each of which is considered to have pandemic potential.3,7 The U.S. department of agriculture monitors and responds to all domestic HPAI outbreaks, but not to Low Pathogenic Avian Influenza (LPAI) strains. LPAI is endemic in poultry, with low mortality, but can reassort through antigenic shift and become highly lethal.3(p91) A Southern California outbreak of LPAI H6N2 in 2001 became highly pathogenic to poultry and led to a massive cull.3(p92)  H7N2 is currently LPAI. However, a 2008 analysis of a 2003 human infection showed that this strain may be evolving antigenic properties similar to the pandemic strains of 1918 and 1957.7

Check back tomorrow for a discussion of how the social, economic and political conditions today increase the likelihood and the potential devastation of another deadly pandemic.