In Parts I, II and III I discussed the biology, morphology, etiology and genetics of influenza and the various influenza pandemics that have occurred over the past century. In Part IV I will discuss the social, political and economic factors that influence influenza ecology and increase the likelihood and potential severity of another deadly flu pandemic.

So far we have dodged many bullets. There are several highly pathogenic avian strains circulating among poultry and other fowl that cannot yet easily infect humans. The number of these HPAI strains appears to be growing. There are several socioeconomic factors that contribute not only to the proliferation of HPAI strains, but also create opportunities for them to mix and reassort with human and porcine strains. Further, some of these socioeconomic factors could make a modern pandemic just as devastating, or worse, than 1918. These factors include the growth of mega farms, in which tens of thousands of animals are crammed into relatively small areas; the growth of mega slums, such as those found in Mumbai and Nairobi, where hundreds of thousands of people live closely together in squalor; the industrialization of Southern China, where mega farms and mega slums collide with migrating water fowl that harbor novel influenza strains; and the decline in public health and veterinary surveillance systems which can monitor and quash outbreaks before they turn into pandemics.

Mega farms are an enormous threat to public safety. They pollute the air, land and water with animal wastes and they use up an inordinate amount of water. However, the most dangerous aspect of mega farms may be the fact that so many animals are cramped together that they easily spread diseases to each other, forcing farmers to overuse antibiotics and other drugs to avert infections and massive die-offs. This creates an ideal environment for genetic reassortment and antigenic shift of influenza viruses.

20-30 years ago, mega farms were relatively rare in the U.S. and virtually nonexistent in the third world. Ranches typically had a few hundred or, if really large, a few thousand head of cow or swine. The percentage of U.S. hogs raised on factory farms with more than 5000 pigs has increased from 18% of all U.S. swine farms in 1993 to 53% in 2003.3(p90) Western Arkansas and Northern Georgia, alone, slaughter over one billion chickens per year.3(p83) One swine farm in Utah produces more raw sewage than the entire city of Los Angeles.3(p84) The U.S. giant of poultry farming, Tyson, slaughters more than two billion chickens per year in the U.S.3(p83) Mega farms are also starting to grow throughout the world. Charoen Pokphond (CP), the Asian analog of Tyson, has factory farms all over Thailand & China. CP won the very first permit to operate a private enterprise in China, during the economic reorganization initiated by Deng Xiaoping.3(p103-105) In 2003, during the height of a Thai H5N1 outbreak, rather than cull their flocks, CP increased their rate of slaughter and sent diseased chicken meat abroad3(p103-105)
During the 1918 Spanish Flu pandemic, the poor and hungry were the hardest hit, both in morbidity and mortality.3(p28) Germany had a high mortality due to war famine.3(p28) Iran was recovering from several years of cholera, typhus, drought and famine, which contributed to the highest relative influenza mortality (up to 22%) in the world.3(p29) India had a high mortality rate due to famine and concurrent infection with malaria.3(p28) The pandemic hit India during harvest season, exacerbating the famine. Today, the problem of poverty and famine may be worse. In 1918, there were only 25 million slum dwellers worldwide. In 2005, there were over 1 billion, and this is expected to double by 2020.3(p152) As you can see from the table below, some of the world’s densest slums surpass the international average by almost two orders of magnitude. 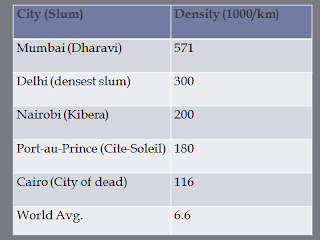 Poverty affects health and immunity in several ways. Malnutrition deprives the body of nutrients and calories necessary for homeostasis. Poverty creates uncertainty about survival, which leads to stress and the overproduction of cortisol, which can lead to diabetes, heart disease, hypertension, and impaired immune response.16 Poverty also forces people to live in overcrowded conditions that facilitate the spread of germs. In many slums, there may be as many as 1000 people sharing a single latrine.3 Slum dwellers are less likely to have adequate (if any) clean drinking water. They have less access to doctors and may be less inclined to take stay home to recuperate from influenza for fear of losing income or their jobs. People who are already ill are much more likely to contract and die from influenza. This is even more true for those with compromised immune systems. In Africa, 27 million people are infected with HIV. Combined with poverty, malnutrition, and poor influenza surveillance and vaccination, Africa will likely be hit hard by an influenza pandemic.3(p160)

Deforestation, over-farming and overfishing have forced many subsistence workers to flee the countryside for the cities throughout the developing world. These practices also deprive people of protein in their diets and encourage the consumption of exotic meats such as civets, in China, the hypothesized source of the SARS virus, or monkeys, in Africa, the likely origin of HIV.3(p58) Deforestation, in particular, brings people in closer contact with wild animals that may harbor novel diseases, such as Ebola. In China, deforestation, over-farming, massive urbanization have led to increased contact with flu carriers, such as wild water fowl in the Pearl River Delta and increased genetic mixing between these vectors of influenza and domesticated pigs, chickens and ducks.3
Influenza A is endemic in ducks and geese from Siberia and Canada. As many as one-third of young ducks and geese harbor the virus.3(p9) It infects their gut and is shed in their feces into the same water they drink and from which they feed. It is usually harmless to them, but it is spread rapidly, permitting considerable exchange of genetic material.3(p9) One study in Alberta found 27 different subtypes in one community of ducks.3(p9) During their migrations to the Gulf Coast and southern China, they may continue to shed influenza for as long as one month.3(p9)

Siberian and Canadian ducks and geese, which form the natural reservoir for influenza and serve as vectors that transmit the disease to swine and people, fly south for the winter, primarily to the Pearl River Delta, in Southern China. The Pearl River Delta is one of the largest conglomerations of humans on Earth. It is home to several large cities including Guangzhou (10 million), Shenzhen (8.4 million), Hong Kong (7 million), Dongguan (6.9 million), Foshan (6.7 million), and three other cities of over 1 million people.14 Macau is also located in the delta and has a population density of more than 18,000 people per square kilometer.14 Much of the region resembles Europe during industrial revolution due to rapid industrialization. There are huge, overcrowded slums, rampant pollution, poverty, all in close proximity to dense poultry and swine farms. The percentage delta residents living in urban settings grew from 32% in 1978 to 70% by 2002.3(p58-9) Air pollution in the delta is 24 times higher than rest of China and 50% of the residents cannot afford medical attention when ill.3(p58-9)
While poverty is high, those who can afford meat are buying it more than ever before.. This has led to the proliferation of wet markets (where live animals are sold from cages), that serve as swap meets for influenza genes. Poultry consumption in China more than doubled since 1980. There are 700 million chickens in Guangdong province and many of the chicken cages sit atop pig pens, allowing the pigs to eat infected chicken feces. 2003 study of the Guangdong area found 500 different flu strains in wild & domestic birds (53 subtypes of H9, alone).3(p62-63)

Stay tuned for Part V, tomorrow, when I will discuss how crumbling public health infrastructures also increase the chances of another deadly pandemic and the consequences.